He is risen! Alleluia!

A very Happy Easter to everyone.  I hope you have a blessed and peaceful day, spent as you wish, but hopefully with family or friends.  We are going to church this morning [those who are well enough!] and then UJ is coming to lunch, and will probably spend the rest of the day here.  The girls are planning a bike ride later, and perhaps my dad will pop over, if he feels up to the ride.
Posted by Morgan at 08:55 2 comments:

And the winner is...

Well, I couldn't stop at one, so I listed the commenters in the order they made their comments, and the FH picked three random numbers for me, and so we have -

Congratulations - Lesley wins the main prize and Ciao and judes07 will get slightly smaller packages.  I am not going to tell you what you are all getting, in order to make it a surprise!  Maybe you would share them on your blogs or tell people in my comments if you don't have a blog, once you have received your parcels.

I'd be glad if you would comment with your addresses for me [I won't publish, as usual] and I will get the parcels in the post on Tuesday.  They are going to include new items, items from here, items I have had here and loved...you'll see!

Commenting on the celebration give away is now closed, but please keep on saying "Hello" from all around the world - we'd really love to hear from you - the FH is absolutely amazed at all the comments so far from such far flung places!  Thanks for reading so faithfully.

I am going shopping tomorrow and I hope to have a scout around the shops for some wee trinkets from this area to send to the winner, as well as some items that I am going to "release" from here......the winner will be selected and announced tomorrow.
Posted by Morgan at 22:38 3 comments: 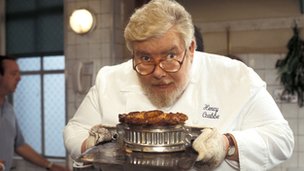 He first came to my attention as the lovable character of Henry Crabbe in the detective/chef series "Pie in the Sky" which we used to watch each week.  He was great in that.

The girls have got to know him as Uncle Vernon in the Harry Potter films, and they have admired his acting, even though the character was a "baddie" in the films!

That doesn't begin to touch on his varied career, but those are the characters in which we knew him best.

For a bit of fun!

My Dashboard says that the top ten countries this month that people have viewed this blog from are: 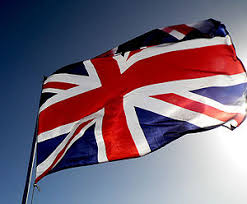 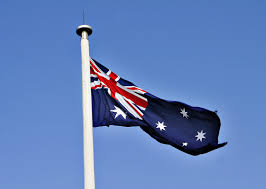 Thank you all for visiting - it would be amazing to get a wave/comment from each of these countries this weekend - we have had lots from the UK already, so could the rest of you just come and say "Hello" or "Guten Tag!" "Bonjour" - greet us in your language if it is not English!
Posted by Morgan at 23:12 6 comments:

This month's challenge to duplicate meals and store the extras in the freezer hasn't been a rip roaring sucess, I have to admit.  I have some leek and potato soup stashed away, but that is about as far as I got on that front.

Where I have improved, and it is a step towards the challenge, is that I have improved at cooking something today, and adapting the leftovers (or planned-overs) for tomorrow.  For example, tonight I fed the family on meatballs, pasta sauce (tinned tomatoes with some gravy granules - they all love it!) and spaghetti.  I can't eat that, so I took some yellow-stickered chicken thighs out of the freezer and found some veg lurking in the fridge, and a 29p of Value Sweet and Sour sauce - which I like as it is quite gingery and not too sweet.  With the addition of some rice, this has become a small portion of chicken and veg risotto for me tonight, with a big pan of sweet and sour chicken and veg for everyone to share tomorrow.  All I have to do tomorrow evening is cook some plain rice to accompany it.

I have two vouchers in hand, and I intend to use them both, probably on Saturday, but it is going to mean some careful planning and stocktaking before I spend!  I have my £5 Helping Hand voucher from Tesco which requires me to choose items to the value of £40 and then get £5 off at the till.  I also printed off the Lidl one for £5 when I choose £35 of items there.  So I have to think about what to buy in which shop, and do a plan!

This month's savings are looking surprisingly healthy but I will wait till the end of the month to talk about that properly - I don't want to count my chickens before they hatch, so to speak....
Posted by Morgan at 20:16 1 comment:

I have just realised that I am going to go through the 100,000 pageview marker tonight or tomorrow, so it calls for a celebration.  I had no idea that so many people would come and read my thoughts and happenings, and it is really humbling that some of you actually keep coming back - thank you.

Everyone who has commented this week, and who comments before 10pm on Friday will be entered in to a celebratory give away.  I have no idea what yet, but past recipients of my give aways don't seem to have been disappointed and I have really enjoyed putting little parcels together!

Give us a wave, say "Hello" and you will be entered.  Anywhere in the world.
Posted by Morgan at 23:10 9 comments:

Welcome to my two new followers who slipped in over the last few days - you are very welcome!

We have had a busy day, and one full of achievements for the FH.  We started with a trip to the doctor this morning, who informed us that he is off to Ethiopia for three weeks, just after Easter, and gave us advice about which locum to see in his absence.  I'm afraid that Ethiopia doesn't strike me as a top ten holiday destination, but given that I have been out of the UK only twice, what do I know?  The doctor took blood and looked at the swelling leg, listened to the FH's lungs and thought that he looked better than he had on Monday.  He is right - two days of antibiotics have made a difference.

I then took the FH to the Wednesday dinner club, which he has been missing.  He enjoyed a very small portion of roast pork and trimmings, followed by fruit flan, and caught up with some of his friends.  It was lovely to see them all welcoming him back, and being so happy to see him after nearly two months.  He definitely enjoyed that.

A quick sit down, and then we were off again to the local cottage hospital to meet the Anticoagulation Nursing Team, to get him started on the Warfarin.  His blood was tested, we were given lots of instructions by three very nice nurses, and started on the tablets from tonight.  He will be reviewed in a week to see how the tablets are working.

Then we nipped into town.  My sister had sent the girls a cheque each for Easter in lieu of an egg (very sensible!) and I put those into the bank, and sorted out my ISA.  The Frugal Graduate has a good post today about ISAs and it prompted me to check the rate on my Instant Access ISA.  I discovered that two days after I transferred the money into that ISA in February, they closed it to new applicants and offered a new ISA product, with the same name, but the second generation of the product, with a 0.25% hike in the rate, so I got my money moved over to the new product this afternoon - the more in my bank account instead of the building society's account, the better!

And tonight, I have been to a Governor Training session at the school.  Very interesting and very challenging, and made us really consider lots of things, and made me think about the questions Ofsted might ask next time they come calling, and whether I will be prepared.  Last time they came, I felt very nervous because it was the first time I had had to deal with them, and can't really remember much about the interview at all!  They are due this year some time so it is best to be prepared, so I have things to think about.  I know that I shouldn't bake when Ofsted are here as last time I baked a cake and then found most of the flour still in the weighing scale pan...

Off to do some more knitting and have a cuppa before bed.

Frugal husbands come in very handy!  If the FH hadn't known what to do tonight, I think I might have panicked a little and spent money...

The EFG managed to get stuck in the bathroom - the catch on the door is dodgy and the YFG has had the foresight to put a large notice on the door, reminding people not to shut the door, because "even Dr Who won't get you out" she says!  He's her hero.

So, reclining by the fire, the FH first instructed me to take the screws out of the door handle, and we passed a flat knife under the door so that the EFG could do the same from the other side, but that was no use.  He then decided that he probably ought to come and have a look, whereupon I was asked to fetch a couple more knives and a rolling pin.

He managed to use the rolling pin as a hammer to push the blade of the knife through the doorstop in order to push the catch out of the way in order that the door might open.  A couple of hefty bangs and the door swung open - thank goodness!

A very valuable lesson tonight for we three girls in how to rescue someone from a room when the handle won't operate the catch on the door - and all for free!

In other news today, I managed to find a ball of quite chunky wool reduced to 50p so I thought I would give that a go with bigger needles and see if it made a slightly bigger hat which would fit me, perhaps, more snugly than the original two I have made so far.  I would like to make one for myself, but the original pattern feels a bit short - I prefer them to come down a little further over my ears.  That might be a project for the weekend.  The largest needles I have are 6.5mm so I will be trying those out; they are bamboo and I haven't used any of my bamboo needles yet, so that will be a new experience for me. 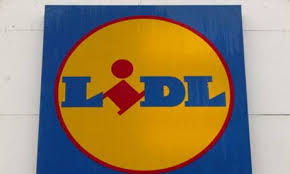 A quick heads-up for Lidl shoppers - they are offering another voucher for £5 when you spend £35 when you like their Facebook page.  It is downloadable now, and valid from Thursday until Saturday, so quite a narrow window of opportunity for this one.  Worth a look, though.
Posted by Morgan at 22:11 No comments: