I found a great, highly recommended muffin recipe on the Australian Simple Savings website, in the forum section.  It is economical because you can bung in whatever you have handy for the flavourings, and it uses a very simple base recipe that anyone could remember!  We have a Simple Saver called Lauren to thank for this one!

The recipe is basic, so basic, but SO effective.  This is what we did:

For the flavouring of this batch, I wanted lemon, so I grated the rind of one [rather old] lemon, and put that in a little dish with some caster sugar and gave it a jolly good stir.

I prepared the muffin cases in the tins, and then put a blob of mixture in the bottom of each case, before adding a half a teaspoon of lemon curd to each.  I topped each one off with a little more mixture, and then sprinkled each with about half a teaspoon of the lemon sugar mixture.

I was then surprised to find that the quantities only made a dozen, so I set to and made it all again!  These cook in about 15 minutes in my oven, set at 160C [it is a fan oven].  The top of each one went beautifully crisp and golden, and the family thought they were delicious.

I have all the remaining chocolate ones and two dozen lemon ones in the freezer, and the YFG has stashed one lemon one in her lunchbox for tomorrow. 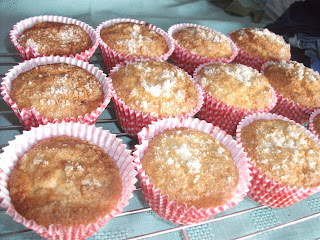 I haven't worked out how cheap these are to make, but I know that each one is going to cost just pennies, and the basic recipe is so versatile that I am sure I will be trying out other variations!
Posted by Morgan at 23:29

they look really good, hope you saved one for me!!

We may make some apple muffins with our windfalls.