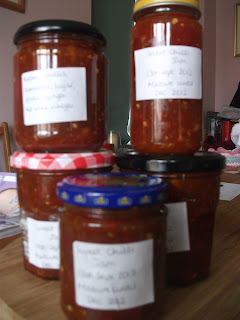 Five jars successfully made this morning!

I never did get round to making this earlier in the week, but it is made now and cooling in the jars, which are clean and labelled - with the name and date on the front and the list of ingredients on the back.

The recipe is here but I have had to modify it slightly this year.  It calls for 8 red peppers.  Have you seen the price of peppers in the shops?  80p each!  That would have been £6.40 just on the peppers, so I had to compromise on that and buy bags of mixed peppers - there were 6 in the bag so I supplemented it with just 2 larger single red peppers.  I was a tiny bit concerned that the finished product wouldn't be quite as red, but I need not have worried - it looks plenty red enough, doesn't it!?!

I used my own chillis from the greenhouse, my own tomatoes, which the FH kindly skinned for me, and a few of our own peppers, but they are rather small, so wouldn't have been enough without buying some to help them along.

Now we are going to store it away for a few weeks and let the flavours mature.  The FH scraped out the pan I cooked it in and declared it rather spicy, which pleased him, so he'll be looking forward to the official opening!
Posted by Morgan at 14:22

Mmmmm...I'm growing my own chilli this year so I might need to be checking out this recipe!

@Thrifty - I have more chillis in the greenhouse and I think I may make more of this, too. People certainly enjoy it with cold meat and cheese, and in sandwiches.