All kinds of grief

I've been doing a lot of work on the bereavement project lately in my role in the church and it has been both eye-opening and challenging.  We have set up a Bereavement Support Group in one of the churches, and it meets monthly. We had two widows the first month and four in the second meeting. I have heard all sorts of comments and sayings just lately: "of course you are crying, dear: if you didn't cry, it would be as if you didn't love him....." was just one of them.  It makes me wonder what folk must think about me, not having shed a tear in public, and not a great deal in private either.

I went on a course provided by Care for the Family, which was excellent, and incredibly informative. I have come across plenty of websites and blogs written to support and encourage people who have lost their partners. I am also looking at a stack of books on the same topic.  I'm a bit inundated!  Then yesterday I went to a chat with some women from another church who are promoting information about dying well. So I am working both sides of the event now.

I have read a really good article tonight about all kinds of grieving not being the same. When I look back over my life, I have lost both grandmothers and a grandfather, a couple of aunts, my mother and now my husband. I've experienced the death of my best friend's brother from suicide, as well as the death of a dearly beloved colleague's son, also from suicide but by another method.  I've seen people grieve and I have done it myself.

Every single relationship brings on a different kind of grief. For me, grandparents' deaths were not as traumatic: they were all over 80 and two were actually over 90 when they died, and so they had achieved the age where younger children are not so shocked to hear of their deaths. I was sad that they had indeed died, but to a young child, as I was when my dad's parents passed on, they were relatively remote characters and I did not feel it as hard as my other grandmother, who died in 2002, four years after her daughter, my mother.  Of all the deaths, my mother's was the worst. We knew she had cancer, but the death itself came very quickly in the space of 8 hours. I grieved terribly and agonisingly for nearly two years, had to have anti-depressants and therapy, and it was a huge loss.

The ladies at the Bereavement Support Group were talking, as we hoped that they would, and one was sharing that the doctor had wanted to put in a support package for her in order to help her to look after her terminally ill husband. She had refused it and said that she wanted to do everything herself. She was a bit shocked when I said that I was willing to accept all the help there was, partly because I was also thinking about the girls. She had expected me to agree with her, and was a bit shocked that I didn't.  But then she has other ideas about her own grief, too, and doesn't expect to really enjoy life any longer now that her life partner has gone.

Oh, how challenged this society is by death. 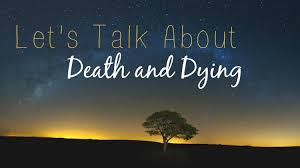 I am finding that people don't want to talk about death, unless they are affected in some way by it, but then even those who have close knowledge of it will expect that other's experience will be similar if not the same.

It can never be the same. Each one of us has a different life experience, different backgrounds, different relationships with our deceased beloved [and in some cases, not beloved] and we come from different death experiences - why on earth would anyone expect grief to affect us all in the same way?

A fascinating topic, I work in the funeral industry and I know that everyone reacts differently to loss and grief. It is not uncommon for family to be dry-eyed, practical and even to be laughing as they talk about their loved ones. It doesn't mean that they didn't love them, and it doesn't mean that they don't have private moments of anguish and despair. I don't see them again after the service, and often wonder how they are coping in those very difficult weeks and months when many people - especially work colleagues, in my experience - have forgotten about it. Much of the grieving process happens in private/without being voiced. Thank you once again for a thoughtful and thought-provoking post.

I know where you are coming from on this. I did not cry at Nicks funeral, although I did shed a few tears at home. To be honest I was glad that he had passed away, had he lived he would have been a vegetable, and for someone as active as her was that would have been far worse.

His daughter, my grand daughter could not understand why I was not in floods of tears, at 18 she does not have the experience of life, she is just now realising what her dad did for her. She was lucky he was so supportive during the last 4 years.

On another subject would love to see you again if you are coming this way, let me know and I will see what we can arrange.

When my mother died, my life improved dramatically. I never mourned her. I dealt with the guilt long before she died. Sometimes there isn't grief.

People are complicated and sometimes sadness comes out in strange ways. I am just coming back to nearly functional after father's death in August, but it wasn't just the grief of losing him. The grief unlocked other stresses and dark places and dealing with the jumble of it all has been a challenge.

Sometimes it's easier to pretend to follow a script and deal with how you really feel in private. hope these thoughts are useful x

Morgan, you are so right about everyone's grief being different.
I was not particularly close to my Dad, but was devastated when he died, but also relieved in away because he was unwell for so long beforehand. In some ways, I had grieved already, because I knew what he had was terminal.As Dad declined, I grew stronger and coped with washing him, toileting him,etc along with my sister and Mum, I was surprised at how I did react at the time and do so even now.
Afterwards there was this void to be filled, a feeling of helplessness. I couldn't cry at his funeral, I gave the address, but felt srangeley detached from it all. We walked into church and my Sisters told me that I was singing at the top of my voice, the song Mum had chosen & did the same thing as we left.
My watershed came last year,31/2 years after his death, when my beloved SIL passed away, just 10 weeks from diagnosis to her death. Then I grieved for both of them. Ruth had asked for Luther Vandross' "Dance with my father again", as she was very lose to her Dad & my Dad too.
The Floodgates opened then and I cried so much in the service and then felt guilty that my grief was for my Dad, not Ruth. In the coming days, I grieved for my Dad in so many ways ending up with three weeks off work, anti depressants & therapy, which has helped.
Another thing that helped, was knowing where my Dad is. Mum found old pictures of her and dad. There was one of my Dad at a Salvation Army Sunday School. Apparently he went there for years and "was under the Banner" in other words "Saved", so I know I will see him again. I also found that my mother received Adult Baptism when she was 14. Confirmation to me that I will see them again some day!
I still grieve for Dad, not as deeply as I did, but sometimes, all it takes is that song, an old Film on the t.v or one of the songs he used to sing and I get a little teary or melancholy, but at least now I have Hope.
Didn't mean to waffle Morgan, sorry.

I agree that each death affects us in a different way. The death of my Mother-in-law, who I loved dearly, affected me more than the death of my own Mother. My Mother's death was expected, my Mother-in-law's wasn't.
But my Dad dying was by far the worse, for with his death I became an orphan, never mind that I was a grown woman with a husband and child, I was an orphan.