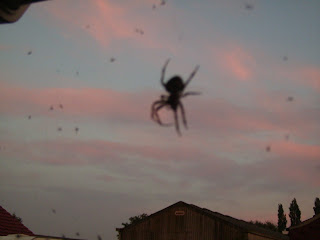 I have been meaning to share this photo for a couple of days and keep forgetting! This is a rather large spider who has been living under our verandah for about a week. She has a large web, her pantry, where she has been catching flies. I managed to catch a quick snap of her as she came out for her supper the other evening.

The disaster (let's get the bad news over first!) was that the YFG got two fingers caught in the car door this afternoon, absolutely screamed with the pain and had to be taken to the local cottage hospital for an x-ray. The two fingers in question are badly bruised, but thankfully not broken. The swelling will hopefully go down over the next day or so, and she is resting it in a sling.

The triumph was the whole family working together this evening to get the concrete base laid for the new greenhouse. It was jolly hard work but it is done! What with the dash to the hospital and the concrete mixing, dinner tonight was basic - FH and EFG had beans with bread rolls as we have run out of bread to make toast, the YFG had noodles and I had leftovers. Easy peasy and very quick! The even better thing was the EFG prepared it whilst I was shovelling concrete.

I am going to start making bread again - I have got out of the habit as the FGs had been wanting white bread to make toast, so I have been buying that, as my home-made bread is rather chunky for that. They will have to adapt, I think, to mine again! The bread machine is going to be set tonight so that there will be fresh bread for breakfast.
Posted by Morgan at 21:32